French Framework for “Kidfluencers” – Yet Another Undertaking for Online Platforms

Through its Act no.2020-1266 dated 19 October 2020 (the Act), the French legislator elected to regulate the commercial exploitation of the images of children aged 16 and under on online platforms (Kidfluencers).

Despite the potentially lucrative consequences of these emerging practices, Kidfluencers operated in a legal vacuum which could have resulted in parents exploiting their children, without the latter reaping any financial benefits or regaining any control of their images upon coming of age.

First and foremost, the Act extends the existing legal framework of child models, under Article L7124-1 of the French Labor Code (FLC). As such, Kidfluencers will require a written authorization from the French Administration prior to being engaged or broadcasted, inter alia:

The latter category was notably introduced to characterize the parents or legal guardians of the influencers as the “employer” of the Kidfluencer. As they may not be as aware of the legal undertakings as the other providers and organizers mentioned, the Administration will provide them with specific information relating to the Kidfluencers’ rights and the risks associated with exhibiting their image online.

Moreover, a portion of the revenue gained by Kidfluencers would be placed in escrow on a French public bank account until their majority.

Secondly, in situation when the broadcast would not be performed for profit, the Act introduces additional protective measures for Kidfluencers: instead of a prior authorization, a simple declaration of the activity will be required, when the published content exceeds certain thresholds in terms of (i) duration or individual items; or (ii) direct or indirect revenues. Such thresholds will be addressed in a supplemental decree to be adopted shortly.

Failing to obtain the authorization or to proceed with the notification would entitle the Administration to seize a court in order to take down the related content.

Finally, the Act also implements a collaborative framework for the online video sharing platforms, and enjoin them to publish dedicated policies to aiming at

While a welcomed step to protect children online, sometimes from their own families, the Act will need to be completed with regard to the thresholds triggering its applicability. In addition, by mainly addressing online video sharing platforms, the Act could have benefited from a more homogenous framework for online platform allowing the sharing of both still and moving pictures. Indeed, while still images could be included in the modeling provision, it remains to be seen how extensively it will be enforced.

Amidst the current discussions surrounding the Digital Services Act at the European level, this France-specific framework creates yet another undertaking for online platforms to implement additional measures to support public policies. And by encouraging users to report any content involving Kidfluencers that could affect their dignity, psychological or physical integrity, the Act could generate extra-territorial consequences, forcing the platforms to deploy such reporting mechanism at a global scale.

K&L Gates IP/IT team in Paris remains available to assist you in assessing the changes triggered by this Act. Please get in touch if you would like to discuss the steps that your organization might want to consider to prepare now for this new Kidfluencer framework.

A French Revolution, at last?

Despite optimistic statements in 2016 on both sides of the Atlantic (in between the European Commission’s communication on connected cars for Europe, and the Obama administration’s Detroit Auto Show announcement), it would seem that some of the hype surrounding connected and autonomous vehicles (“CAVs”) faltered. One reason may be the desensitization of the general public, as the initially promised 2020 deployment is dawning without a hint of general commercial availability in sight. On the other hand, the intricacies of the regulatory frameworks at stake also hinder the development of consumer-ready offers.

More often than not, France is perceived as an administrative maze, yet may become (unexpectedly to some) a leader in the race to regulating this incoming industry. However, far more than being limited to the automotive industry, regulating CAVs will serve as the blueprint for an artificial intelligence (“AI”) legal framework.

END_OF_DOCUMENT_TOKEN_TO_BE_REPLACED

The French Autorité des Marchés Financiers has recently published a synthesis of the contributions it received in response to its public consultation on Initial Coin Offerings (ICOs) to obtain stakeholder views on how these new types of blockchain offerings might be regulated.

The consultation included a presentation of ICOs, a warning on the risks they present, a legal analysis of ICOs with respect to the rules overseen by the AMF and the regulatory options proposed by the AMF. Respondents were invited to give their views on all of these points.

On 26 October 2017, France’s Financial Markets Authority, the “Autorité des Marchés Financiers” (“AMF”), published a discussion paper focusing on initial coin offerings (“ICOs”) that highlights the (many) dangers that arise from these unregulated transactions and discusses the regulation options that it currently foresees.
END_OF_DOCUMENT_TOKEN_TO_BE_REPLACED

Further to the adoption of Act no.2016-1691, dated 9 December 2016, on Transparency, Anti-Corruption and Modernization of Economic Life (“Sapin II” – see our compliance coverage here) and the public consultation whose results were made public on 30 August 2017 (see our coverage here), the French Ministry of Finance published a draft document aiming at adapting the French legal framework to the use of blockchain technology.

The proposed draft (which may be accessed here in French) address the possibility, for company, to register in a “shared electronic registry”:

The conditions under which such registration would possible expressly exclude any item admitted to the operations of a central depository or delivered in a system for the payment and delivery of financial instruments. In addition, the bylaws of the issuer must expressly provide for the possibility to use such shared electronic registries.

In any case, the French regulatory framework would subject to French law whenever the issuer is headquartered in France or the issuance itself is already governed by French law.

Additional technical measures will subsequently be devised by a supplementing Decree, in order to provide the required safeguards.

While assessing the relevancy of a blockchain framework for corporate titles remains difficult in the absence of such technical details, all players are welcome to provide the Ministry with observations on the proposed framework until 9 October 2017.

The French Act no.2016-1691 dated 9 December 2016 on Transparency, Anti-Corruption and Modernization of Economic Life (Or “Sapin II” – see our compliance coverage here) empowered the Government to amend the regulatory framework to facilitate the transmission of certain financial securities through blockchain technology 1)Article 120 of Sapin II “The Government may by way of executive orders within the 12 months following this Act take the measures necessary to (…) … Continue reading

In order to prepare such executive order, the Ministry of Finance initiated last Spring a public consultation, whose results were made public on 30 August 2017.
END_OF_DOCUMENT_TOKEN_TO_BE_REPLACED 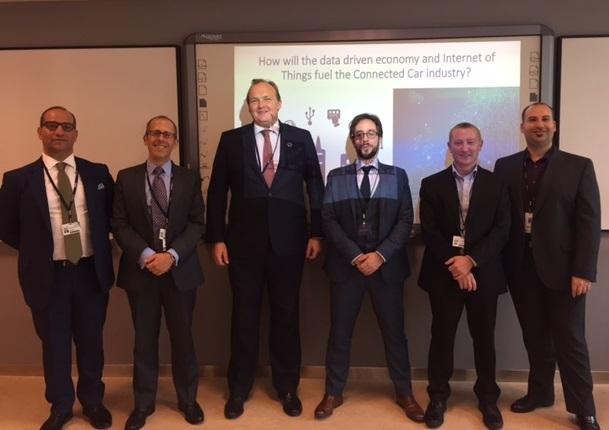 Impact of the Digital Republic Act on Online Intermediation Platforms

The Digital Republic Act creates a general, autonomous and impersonal status of online platform operator (“OPO”) and completes the existing legal framework relating to consumer protection through the consumers’ prior information.
END_OF_DOCUMENT_TOKEN_TO_BE_REPLACED

Globalization of Connected and Autonomous Cars – A Long and Winding Road?

The advent of autonomous cars represents a unique opportunity to rethink urbanism globally. Indeed, such a technological evolution will undoubtedly foster the development of a range of new offerings, such as car sharing and value-added opportunities, while at the same time ensure added safety on the roads at a time when traffic injuries remain the primary cause of death among people aged 15 to 29.

One direction in which this new paradigm could be expressed may be the decline of exclusive car ownership and the shift toward CaaS, or “Car-as-a-Service”. Autonomous cars could be shared among a community of subscribers and used on an as-needed basis, after which they could then park themselves outside of the urban landscape for battery-reloading purposes or when not in use.
Nevertheless, such an idealistic picture can only be achieved once all regulatory barriers have been lifted.
END_OF_DOCUMENT_TOKEN_TO_BE_REPLACED

We use cookies on our website to give you the most relevant experience by remembering your preferences and repeat visits, as well as some analytics by Google and social buttons. By clicking “Accept”, you consent to the use of ALL the cookies. You may also customize the selection
Cookie settingsACCEPT REJECT
Manage cookies

This website uses cookies to improve your experience while you navigate through the website. Out of these, the cookies that are categorized as necessary are stored on your browser as they are essential for the working of basic functionalities of the website. We also use third-party cookies that help us analyze and understand how you use this website. These cookies will be stored in your browser only with your consent. You also have the option to opt-out of these cookies. But opting out of some of these cookies may affect your browsing experience.
Necessary Always Enabled
Necessary cookies are absolutely essential for the website to function properly. This category only includes cookies that ensures basic functionalities and security features of the website. These cookies do not store any personal information.
Non-necessary
Any cookies that may not be particularly necessary for the website to function and is used specifically to collect user personal data via analytics, ads, other embedded contents are termed as non-necessary cookies. It is mandatory to procure user consent prior to running these cookies on your website.
SAVE & ACCEPT